Back in February, Nintendo held one of their famous Nintendo Direct’s and during it we were treated with the announcement of Fire Emblem Warriors: Three Hopes. A game focused on the cast and story of Fire Emblem Three Houses (which KOEI Tecmo co-developed back in 2019).

The game will be launching worldwide physically and digitally for Nintendo Switch on June 24th 2022. You can read the official overview and the announcement trailer below:

Edelgard, Dimitri, Claude, and other Fire Emblem: Three Houses characters return to put their combat expertise on display as you revisit a war-torn Fodlan.

Cut through hordes of enemies as characters from the Fire Emblem: Three Houses game. Take down dozens of foes with Edelgard’s axe or Dimitri’s lance, or blast enemies from a distance with Claude’s bow. Slash, swing, and spear your way to a brighter future for Fodlan.

Purchase the digital version of the game to receive regular visits from a friendly messenger owl outside of your personal quarters. It’ll gift you Owl Feathers that can be used to boost your support level with other characters!

Are you excited to see another entry in the Fire Emblem Warriors series? Let us know in those comments!

We have known since the very start of this Season Pass release that the third (and currently final) DLC pack for Fire Emblem Warriors will be releasing this Month, and will be themed after the game Fire Emblem Awakening, but now it is finally released to the world! You can see attached what comes with this third DLC pack!

Owain
Voiced by: Hidenori Takahashi
Weapon: Sword
Class: Swordsman
With his character skill, “Balanced Power Resonance,” the smaller the difference between his Str and Mag, the greater the damage he can deal to enemies.

Tharja
Voiced by: Yuuki Takada
Weapon: Grimoire
Class: Dark Mage
Although she will take slip damage when her character skill, “Covenant of Destruction,” is equipped, the lesser her HP gets, the greater the damage she can deal to enemies. (The HP reduced by slip damage will not affect your Battle Results.)

Scion of Legend
A mysterious swordsman seeking the legendary divine sword “Mystletainn” shows up in a certain village.

Exalt Emmeryn
Chrom and company, who visited Plegia in order to rescue Emmeryn, come across a shaman who re-chants a suspicious spell.

Caravan Dancer
While Plegia soldiers withdrew from the battlefield, the figure of a determined, lone dancer heading towards the battlefield appeared.

(Additional costumes, usable weapons, and weapon skills can be obtained as rewards for clearing History Maps.)

Additionally to all of this, a new patch update has been released as well alongside this DLC Pack. You can find out what it contains below.

Weapon Skills
“Rightful God” – Increases weapon attack power to match that of a Hero Weapon, and negates the disadvantages of an effectiveness weapon skill. (This can be obtained via a random drop.)

Additional Elements – The following additional elements have been added to the Temple:
“Informal Blessing” – By receiving this blessing, the levels of all enemies in battle will become 150.
“Tactician Blessing” – By receiving this blessing, the battle will enter a “Tactician Mode” where the player-controlled character can only deal zero damage, making it a fight can only be cleared via NPC instruction.
(Informal Blessing and Tactician Blessing will be added to the “Blessings” menu at the Temple.)
“Level Reset” – Level Reset has been added to the Temple menu. Depending on the level of the selected character, you can revert to Level 1 instead of receiving materials.

Other
-Switch Version: Support for the video capture feature.
-Adds feature to start the battle with the same blessings as the previous battle. (Materials will be automatically consumed. This can be turned on or off via “Auto Blessing Continuation” in the settings.)
-User interface improvements for the Battle Results screen.
-Bug fixes.

So there you have it, a bevy of content that looks like to conclude the content additions for Fire Emblem Warriors. A lovely mashup of Nintendo’s Fire Emblem series and KOEI Tecmo’s Dynasty Warriors series, exclusively for Nintendo Switch and New Nintendo 3DS.

You can buy this DLC pack on it’s own for £8.09/€8.99/$8.99 or have it free with that juicy Season Pass. The patch will be free to everyone including non Season Pass holders.

What are you thoughts on this update? Are you happy to see all this support for Fire Emblem Warriors? Let us know in the comments!

>> Check out our Fire Emblem Warriors game page now!
>> Join the discussion on our forum now! 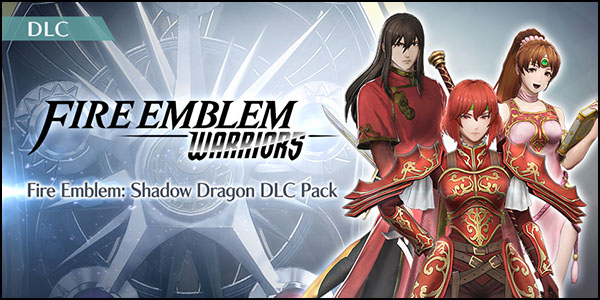 Fire Emblem Warriors second DLC pack launched today (or yesterday for some) exclusively on the Nintendo Switch and New Nintendo 3DS. Costing £8.09/€8.99/$8.99 on it’s own or for free with the Season Pass purchase, you will gain a new bevy of content to continue your slashing adventure!

Included in the pack is as follows:

Alongside the release of this new DLC, there has been a free patch update that includes numerous new tweaks and additions to the game. See what it has below!

Other
Turn On / Off Crest Creation confirmation and presentation from the settings.
UI improvements, including the map and menu composition of the deployment screen.
Bug fixes.

So all in all a good day for owners of Fire Emblem Warriors! Will you be heading back into the fray? Let us know in the comments!

>> Check out our Fire Emblem Warriors game page now!
>> Join the discussion on our forum now!

With 2018 now officially starting, we can take a look at the not too distant future into the year and see what Koei Tecmo is releasing for us! Note this is only currently announced items, we won’t be going into rumours, speculations or wishes!

First up is Dissidia: Final Fantasy NT – A collaborative title between Square-Enix and KT’s Team Ninja. In similar vein to Dead or Alive, this is a 3D fighter game. But what switches things up that you get far more control over your character in a 3v3 environment. Characters and levels are taken from numerous Final Fantasy titles, from Cloud (Final Fantasy VII) to Noctis (Final Fantasy XV) to even Warrior of Light (Final Fantasy I).

Boasting an intense story mode not included in the original Arcade release, and massive amounts of competitive content, this is a great start of the Year for you PS4 owners out there!

Next up, and probably Koei Tecmo’s biggest release for this year (so far), Dynasty Warriors 9. A lot of mixed feelings regarding this but it certainly looks like it has a ton of ambition put into this latest title to the Dynasty Warriors franchise. Boasting an open world China, a story spanning the entire Three Kingdoms period from start to finish and more characters than ever before!

Dynasty Warriors 9 will be bringing back high octane slicing and dicing to you guys worldwide in February.

Now not an actual game, but continued support for one of the better titles released from KT last year. Fire Emblem Warriors DLC Pack #2 and #3 will be releasing in 2018. Included in both these packs, dubbed Shadow Dragon Pack and Awakening Pack respectively, you’ll be granted to a bevy of more playable characters, History mode maps, weapons and more! All included for free if you picked up the Season Pass or you can purchase these pack’s individually as they release (first pack already out) from your Nintendo devices eShop.

We don’t have solid release dates for these yet aside the month they will arrive. But judging how Nintendo deal with their release plans, we will likely find out a week before, if not THE week it releases. No doubt on a Thursday.

The penultimate game on our line-up list, is A.O.T 2 (Attack on Titan 2 for you yanks) which brings up to 4 player cooperative naked giant slaying. Along with promising a more intense experience from the original game released back in 2016, you will also be able to create your own Scout and take him/her out into the online world to fight alongside other player’s Scouts against the giant menace.

With friendship systems, an anime focused story and well, neck slicing, this is definitely a game to keep an eye out for this March.

Last but not least, we have one for you JRPG lovers out there. If you are still lusting for more Gust goodness after Blue Reflection last September, or wanting to concluded the “Mysterious” trilogy then this will be a necessity in your collection. Follow the lives of twins Lydie and Suelle as they try to achieve their dream of running the top atelier for their kingdom; Adalett.

Expect beautiful Cel shaded visuals, corny dialogue and a story that’ll take you through all kinds of various synthesising antics. Be sure to get your anime style RPG on this March.

And that is it! All we currently know for sure that is planned for 2018 from the big guys at Koei Tecmo! As the year starts to make more progress we will definitely start to hear of a lot more coming our way. But until then, happy conquering guys!

We have a bunch of fresh information in regards to the upcoming Nintendo and KOEI Tecmo collaboration; Fire Emblem Warriors for Nintendo Switch and New Nintendo 3DS. We also want to quickly make clear to keep an eye out for our hands on of the game in the near future!

First off, the best piece of news which you may have already seen via our Facebook page, is the release date. The game will be releasing for both Nintendo Switch and New Nintendo 3DS physically and digitally in the West on October 20th 2017!

Next up, for you lucky guys in Europe, you will be able to pre-order a Limited Edition of the game for Nintendo Switch, including a multitude of goodies shown in the picture above! We still do not know if America will receive a similar Limited Edition but we will be sure to post about it when we know!

Also to add on to all the release news, we now know of even more characters coming to the game. Leo, Takumi, Hinoka and Camilla from Fire Emblem Fates join the war!

One last thing to add is another piece of information for you performance guys out there. You can choose between 1080p/30fps and 720p/60fps for either undocked and docked playing for the Nintendo Switch version. This is a similar feature that first became available in KOEI Tecmo’s Ni-Oh title, and it is great to see this happening to more of their games.

And with all that we will leave you guys with the spectacular Gamescom 2017 trailer for the game. Are you excited to get this game? Which platform is your choice? Let us know in the comments!