Our Dead or Alive 6 Pre-Review Impressions! 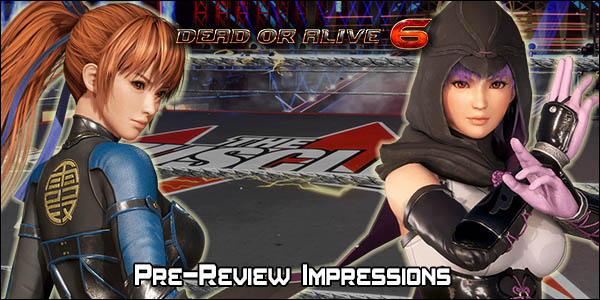 First of all we want to make it clear that these are strictly initial impressions of the game, we are working through it to get a proper review out in the early parts of next week. These impressions are also for the XBOX One version of the game, and may gloss over certain aspects we will delve into more in the full review (such as online play and any later game parts).

Dead or Alive 6 is the latest instalment to the Dead or Alive franchise, and as such comes with quite high expectations with the numerous launches and content updates the 5th instalment went through. With Dead or Alive 6 there are two main game modes – Story Mode and DOA Quest Mode. These are the two modes you will spend most of your solo play time with.

Let’s start off with DOA Quest Mode, this is kind of like a loot grind mode, where you take on specific set challenges with predetermined fighters to gain in-game currency along with costume parts. In-game currency can be spent on unlocking numerous extras and lore, as well as costumes for the fighters. However before you can purchase the outfits, you need to acquire their costume parts, which can be done so through this mode by completing all three challenges for each set mission.

Story Mode is the more beefy experience, which is riddled with well animated cut-scenes, full voice acting and destructive fights. You get a choice of various scenarios which will unlock periodically as you progress. Every character has their own place in the story, and their own story arc you can follow through with. We are still fairly early on in the story itself, but there definitely seems to be a lot of fights and cut-scenes to binge on.

As for the fighting itself, there are quite a few new additions. Though the core gameplay still revolves around timed attacks and countering your opponent, there is a new special combo string called Fatal Rush. When you are fighting, you build up a rush metre which when full you can unleash a Fatal Rush combo. This combo effectively deals a lot of damage to your opponent and if you succeed in landing all hits will end with a devastating finisher which will both physically and visibly deal damage to your opponent. It was fun seeing parts of clothes get torn, or even simple things like a fighters hair braid breaking as a result of these Fatal Rush combos.

There is also a new level of realism to the game, actions you take can cause dirt to cover your clothes, sweat to come from you and even see results such as blood and busted bones if the right circumstances are met. Though we want to quickly mention as is probably a fairly hot topic – yes the jiggle physics are still as crazy as ever, especially for the girls that have not-so-tight outfits on.

As well as all of the above, other game modes include your standard Fight modes, which are the standard Arcade, vs CPU/Friends, Time Attack and Survival, generally what you expect from a fighting game. There is also an extensive Training mode for all you inexperienced players out there, or if you just want to brush up on your skills. Lastly there is Online mode, where you can (at least as of right now) play in Ranked matches against fellow fighters across the world.

Our thoughts so far on the game have been rather positive. The game looks and functions very well, there seems to be a ton of content to immerse yourself in for both Online competitive fans and solo play fans. We do have some complaints however, such as the loading times can sometimes be rather long, and isn’t helped that the loading screens are often a bland black screen you have to stare at. Another issue is how Nyotengu and Phase 4 are integrated. They are in the game, and the AI can pick and choose them to fight against you, however if you try to customise or play as them you are greeted with a “You do not have the license for this character” screen. It seems very bait-ey to get people to buy these characters when they eventually go on sale.

All in all we like it so far, and can recommend it. Though our full review will get much more nit and gritty on details and highlight more what Online play can offer. Look forward to that in the coming days!

>> Check out our Dead or Alive 6 game page now!
>> Join the discussion on our forum now!

2 comments on “Our Dead or Alive 6 Pre-Review Impressions!”