Atelier Rorona, Totori and Meruru have arrived today in their Deluxe forms! 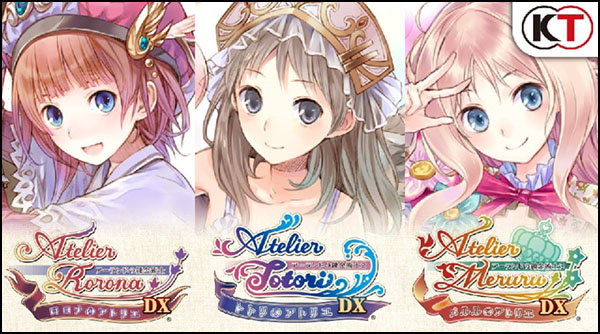 Atelier Arland Trilogy DX is out now digitally on Playstation 4, Nintendo Switch and PC via Steam. You can buy Atelier Rorona, Atelier Totori or Atelier Meruru individually or all together in one bundled price. The games are their “Plus” variations, which includes every piece of DLC released for each of the games.

You can read KOEI Tecmo’s full information on the trilogy below:

The deluxe pack includes all three beloved GUST titles featured in the Arland trilogy: Atelier Rorona: The Alchemists of Arland DX, Atelier Totori: The Adventurer of Arland DX, and Atelier Meruru: The Apprentice of Arland DX. The pack includes most of the previously released DLC content and gives players the opportunity to choose between purchasing these titles individually or as a package containing all three at a discounted price.

The Arland series, which launched in 2009 with the debut of Atelier Rorona: The Alchemists of Arland – the 11th game in the Atelier role-playing franchise – and quickly became a cult classic across the world; spawning sequels featuring new Arland characters, including Totori and Meruru. The fourth game in the series, Atelier Lulua: The Scion of Arland, is scheduled for a Spring 2019 release.

This is the perfect chance to get fully caught up to date on the story so far in time for the release of the fourth entry coming Spring of next year.

Below you can check out the launch trailer to see all three games in action!

What are your thoughts on the Arland Trilogy DX? Will you be picking any of the three up? Let us know in those comments!

Atelier Rorona, Totori and Meruru are coming this December in the Deluxe Arland Trilogy!

A while back we announced that Japan was receiving a special Deluxe edition of the Arland Trilogy: Atelier Rorona Plus, Atelier Totori Plus and Atelier Meruru Plus, remastered with all DLC included. Now in the wake of the delay for Nelke & the Legendary Alchemists, KOEI Tecmo have announced that this very Deluxe Arland Trilogy will be releasing to the West on December 4th both in Europe and the Americas.

The trilogy will be a digital only release for Playstation 4, Nintendo Switch and PC via Steam.

It has also been confirmed that you will be able to purchase the games individually or all together in one bundled pack. Pricing and such will be revealed closer to it’s release date.

What are your thoughts on this? Will you pick up any of the trio of Arland? Let us know in those comments!

Atelier “Arland” Trilogy coming to PS4 and Switch this September.. in Japan 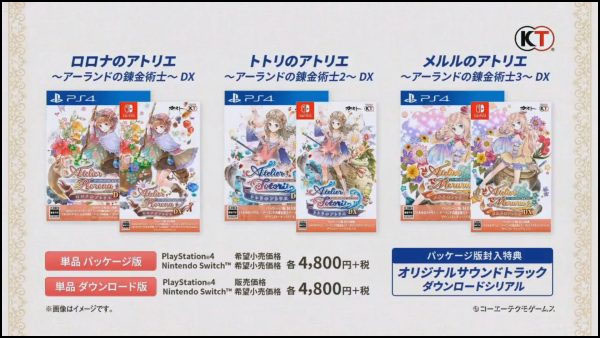 We have been treated to a lot of Gust’s famed Atelier Series JRPGs over the years, and now KOEI Tecmo have confirmed (well earlier in the month, sue us) that the first three HD games will be making their way to both the Playstation 4 and Nintendo Switch this September – however only in Japan currently.

This means that New Atelier Rorona, Atelier Totori Plus and Atelier Meruru Plus will be complete on current gen systems (the ones Japan care about anyway), with being able to purchase the games separately or in a single trilogy bundle. The games will include all their “New” and “Plus” content respectively and all prior DLC released will be in as well at no extra cost.

But what does this mean for us Westerners? Going by how successful the Atelier Series is over here, it will likely see the light of day sometime in the new year, especially as we’ve received two Atelier games this year alone (the second arriving this Winter).

You can check out the Japanese trailer below for the trilogy set.

What are your thoughts on these titles coming to Nintendo Switch and PS4? Do you want to see the Dusk trilogy make their way also? Or even get the first two Mysterious titles on Switch? Let us know in those comments!