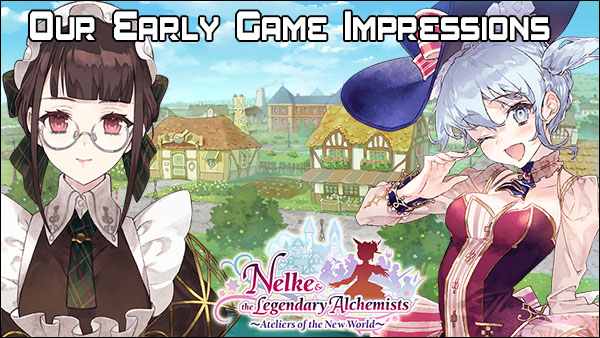 Nelke & the Legendary Alchemists is a spin-off to the standard Atelier series in celebration of it’s 20th Anniversary. Bringing tons of fan favourite characters along with characters you may have forgotten all into one mini-universe that focuses on the adventures of the titular Nelke. We want to quickly add this is Impressions from early game, and it is for the Nintendo Switch edition of the game.

Let’s get right off the bat that this is a spin-off, and does have it’s own unique play style and design. It doesn’t play like the normal Atelier experience you have become accustomed to, but that definitely isn’t a detriment to it. If anything, the changes and design choices fit the series for the better, especially with the game’s focus on Town Management over Alchemy based adventuring.

The game starts off with Nelke and her maid Misty walking towards a new region and town known as Westbald. You find out that Nelke has been assigned by her father to become the town’s new Governor. When you first make your way into town (note all this is done in cutscene form) you meet the current village chief; Kunos – a young man who had the village dumped on him by his early retiring father. Kunos will be your go-to man for all general essentials for the village.

Kunos guides you to your place of operations, which is a lavish mansion upon a hill. From there you get put into full hand holding mode to teach you how to play the game. Most of the game is spent in menus and simulation style play. You are given a plot of land with various space to construct and play buildings. You first start off making a general store for veteran character Pamela. You also soon find out that you can head on out and Investigate varying regions outside of the village. This enables you to seek ingredients and materials to further develop your town.

When you go on these investigations you will be put in a walking simulated cutscene, where every now and then your party will stop and find search spots. You have no control aside from the option to “run” which will allow your characters to reach the end faster, but in return you will skip over possible search spots. When you do get given full control, it is when a random battle appears, where you will then go into your typical Atelier style Turn-based combat. This is the usual really, you pick your attack options, after each attack you grow your power gauge in which you can then spend on special attacks. These stack from battle to battle which is handy to prepare for future possibly tougher battles.

When you reach your goal, or your investigation time ends you return back to the town and get a report on what your findings were. Once you have learned these actions you will come across an Alchemist, who happens to be from the Atelier Marie games. Marie is here investigating a local suspicious rumoured Tree, which Nelke is also investigating similar things. They decide to team up and Marie settles in to your town – but for this to be the perfect match you decide to build her an Atelier to call her own.

A familiar face has been your go-to construction guy, who has been handling all your buildings and improvements. It’s none other than Hagel, the often Blacksmith of the Atelier series. You give him materials you need and he will construct the building you desire. After so many days (turns) pass the building will be fully constructed.

Now with the Atelier up, and general shop you can start properly developing your town. Alchemy can be used to create basic items or anything that you come up with. You can then sell them off at the General Store or use them to help with investigations or even for further town development.

You have your town ready in it’s base form now, and you start to get given your own free control of the game. It really is a different kind of beast this game in comparison to it’s other entries in the series. Though it seems like you are watching more things happening rather than personally controlling it yourself, but it suits the style of game that is definitely more like a Town Management Sim than your typical JRPG. Though there are a few hiccups, like it is odd that odd points within talking cut-scenes certain lines of dialog won’t be voiced. We have been really enjoying it so far, and hope that you don’t overlook the game for the next proper Atelier game arriving later in the year. We give this a big thumbs up of approval!

>> Check out our Nelke & the Legendary Alchemists game page now!
>> Join the discussion on our forum now!