Dynasty Warriors 9 adds yet another patch that includes more fixes and new content! 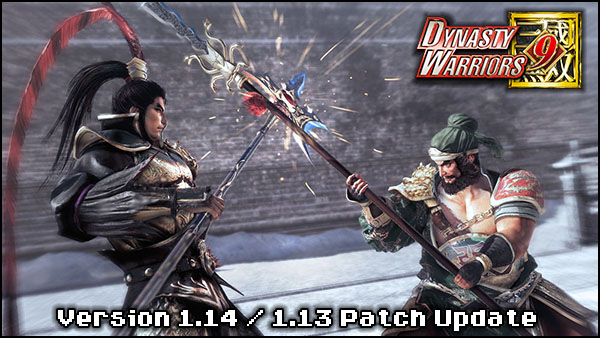 Who would of thought when Dynasty Warriors 9 released back in February, and after it’s commercial failure that Omega Force would still be pushing out fixes and updates for it. Well here we are now in September – a whopping 7 months later – and Dynasty Warriors 9 has just received another Patch update, now leading the game to become Version 1.14 (or 1.13 for Steam version).

You can see the patch notes attached below:

– Added BGM from a previous title from the DYNASTY WARRIORS series.
– Added new bows.
– Added new arrows.
– Added a new feature that allows players to change the wallpaper, and added several new wallpapers to use with the feature.
– Improved the frame rate.
– Made improvements with respect to the numbers of enemies that appear on the battlefield.
– Increased the speed in which messages are displayed upon completing missions.
– Made improvements to the behavior of officers during battle.
– Corrected a number of other minor issues.

The Steam version has the same update, albeit as Version 1.13. The XBOX One version like always will be slightly behind due to how it is exclusive to the Western territories on that platform.

But as you can see, Omega Force and KOEI Tecmo still think there is some life still kicking in Dynasty Warriors 9. What are your thoughts on the games continued support? Let us know in those comments!