Warriors Orochi 4 will have Save Data Import Bonuses!

KOEI Tecmo Japan have revealed that for those of you who purchase Warriors Orochi 4, you’ll be able to import old save data to grant you some early bonuses within the game. Much like how many of other KOEI Tecmo games work, if you have the previous entry of the series or a similar enough game to the series’ save data, it’ll grant you a small bonus in the game.

For those of you who own a previous iteration of Warriors Orochi 3 Ultimate (you can find the table just below), you will be granted Stock EXP as a bonus. The amount you get is based on how many kills you have total on your save data (with a maximum of 100,000). The following save data is compatible: 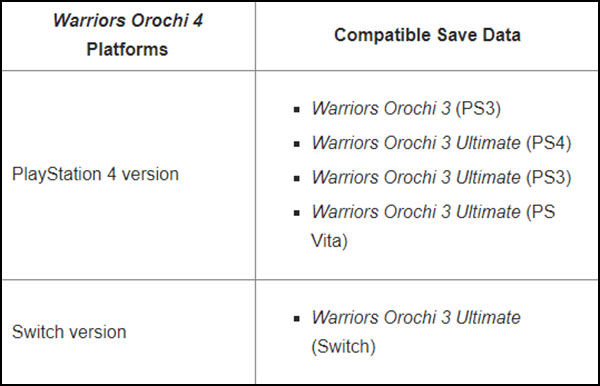 Warriors Orochi 4 releases to the Americas on October 16th and October 19th for Europe. It’ll be coming to PS4, XBOX One, Nintendo Switch and PC via Steam.

But let us know what you think of this. Are you happy to see this Import Save Data bonuses continue to be a trend with Omega Force and KOEI Tecmo? Let us know in the comments!

>> Check out our Warriors Orochi 4 game page now!
>> Join the discussion on our forum now!