Ni-Oh is coming to PC this November in it’s Complete form! 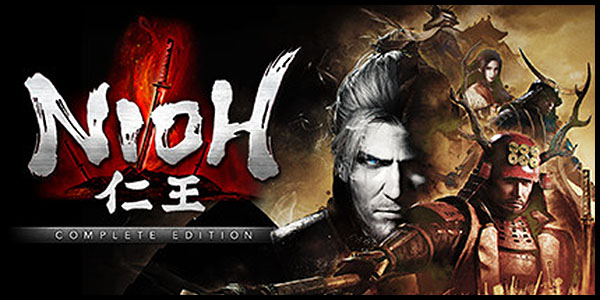 As we announced in our last Ni-Oh post, that in Japan they were going to be receiving a Complete Edition of Ni-Oh for PS4. Well now we have confirmation that Ni-Oh will be venturing to PC via Steam November 7th in it’s complete form with all three DLC chapters.

Alongside getting the complete package, the game will boast 4K graphical fidelity and for those that pick up the Steam version will also receive an exclusive Kabuto helmet for your William to wear!

Check out the press release attachment below and get yourself hyped! As for the possible PS4 version in the West, that it still likely in the hands of Sony Computer Entertainment to formally announce.

KOEI TECMO Games is excited to announce today the upcoming release of celebrated dark fantasy action-RPG Nioh: Complete Edition on PC via Steam®. Met with both critical and commercial success on consoles, the game tells the story of the blonde-haired swordsman and makes its PC debut on the 7th November 2017 as Nioh: Complete Edition, packed with hours of extra content as it will include the original version of Nioh and all three DLC expansions: ‘Dragon of the North’, ‘Defiant Honour’, and ‘Bloodshed’s End’.

Calling PC gamers to “#DefyDeath”, Director Fumihiko Yasuda comments: “Team NINJA is well aware of the fact that many gamers have been passionately asking for a PC version of “Nioh”. I am thrilled to announce that this masocore game will finally be available for our die-hard PC fans in Nioh: Complete Edition! I hope you all enjoy the unforgettable drama and deeply challenging Yokai battles this action-packed experience has to offer.”

The digital-only PC release boasts stunning high-resolution graphics over two modes as Nioh: Complete Edition can be enjoyed either on ‘Action Mode’, featuring a stable 60fps, or on ‘Movie Mode’, a cinematic option that can expand the display resolution to 4K. These new enhanced graphical modes bring the dark and beautiful world of Nioh to life like never before.

To celebrate the release of Nioh: Complete Edition on Steam®, Team NINJA is offering players a brand-new item, the Dharmachakra Kabuto helmet. The Wheel of Dharma kabuto is a form of “kawari-kabuto”—a family of helmets featuring fantastical designs. This helmet features a red-lacquered front crest of an ancient Buddhist symbol depicting the eightfold path to nirvana. This holy image represents spiritual enlightenment attained by casting off one’s worldly desires, and also holds the power to banish evil. However, some claim this is not a Wheel of Dharma at all, merely a replica that looks as though it belongs on a device to regulate steam… Some have gone so far as to suggest renaming it to “Valve Kabuto,” but why anyone would make a helmet featuring a valve is unclear…

About Nioh: Complete Edition
Nioh: Complete Edition is a dark, fantasy action RPG, which challenges players to traverse war-torn Japan as a blonde-haired swordsman whose background as a fierce warrior and seasoned knowledge of the blade allows him to survive in the demon-plagued land of the samurai.

Blending a compelling narrative loosely based on the tale of the first western samurai, William Adams, with a myriad of strange supernatural creatures from Japanese folklore (Yokai), players of Nioh: Complete Edition will discover a diverse and comprehensive world dripping with history and lore, and face off against other samurai in epic sword battles and intense, multi-target engagements.

Offering a level of difficulty that will truly test even the most hardened samurai’s skills, patience, and strategy, Nioh: Complete Edition, includes all three Nioh DLC expansions. In contrast to the PlayStation®4 version, all seven weapon types, ninjutsu and onmyo magics will be available to players from the beginning, while finishing the core game will also unlock features like the Dual Guardian Spirit.

The ‘Dragon of the North’ DLC follows on from William’s valiant struggle in the main game, opening up the region of Oshu and introducing terrifying new enemies, weapons, armour, ninja skills, magic and Guardian Spirits.

‘Defiant Honour’ moves the narrative to the Osaka region and focuses on one of the defining battles of late Sengoku era introducing new key characters, weapons, equipment, enemies, Guardian Spirits, an even more challenging difficulty level and new trophies.

Finishing the core game of Nioh: Complete Edition incrementally unlocks access to the deeper levels of the game’s ultimate challenge: The Abyss. This ethereal world, made up of innumerable floors, punishingly difficult boss enemies, and considerable risks, is so challenging that players are even allowed to summon up to two other visitors to overcome the dangers that lurk therein!

What do you think of this news? Are you excited to get your butt severely destroyed again, but now in 4K? Let us know in the comments!

>> Check out our Ni-Oh game page now!
>> Join the discussion on our Forum now!
>> Check out the Steam page for Ni-Oh: Complete Edition now!