In a surprise announcement from Nintendo, a new collaborative title is coming from them and KOEI Tecmo. A new Hyrule Warriors title, based on Legend of Zelda: Breath of the Wild’s 100 year past. With the game featuring the iconic graphical style of Breath of the Wild along with new characters and play styles, you’ll be able to enjoy the history that lead to the infamous events of Calamity Ganon.

You can check out the full video presentation below:

We will have more information on the title to share soon along with our own game page for the title.

Hyrule Warriors: Age of Calamity will be launching November 20th worldwide exclusively for the Nintendo Switch.

What are you hoping to see coming from this Hyrule Warriors instalment? Let us know in those comments!

>> Check out our Hyrule Warriors: Age of Calamity game page now!
>> Join the discussion on our forum now!

Hyrule Warriors: Definitive Edition is out now in the West exclusively for the Nintendo Switch! Including all of the content from the base game on Wii U, the Wii U’s DLC packs, the Hyrule Warriors Legends game content, and THAT game’s DLC packs.

Along with all this content, the game sports single joycon multiplayer, local wireless multiplayer, and the Breath of the Wild costume skins for Link and Zelda. This is the best and more complete edition of Hyrule Warriors you’ll get your hands on, and can play it in stunning High Definition on both your TV at 1080p 60FPS or in Handheld mode at 720p 30FPS.

With the immense amount of content this game contains, and with our lack of a review on the original Wii U version of the game, this will be taking us some time to get our review up and out – but rest assured it is in the process of being written!

What are your thoughts on Hyrule Warriors: Definitive Edition? Will you be playing this for the first time? Let us know in the comments! 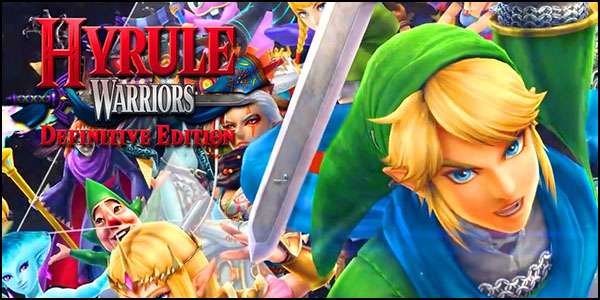 Today was the day Nintendo spoilt the world with yet another one of it’s jam-packed Nintendo Direct videos, and inside it we were informed of the release date for the upcoming Definitive Edition of Hyrule Warriors coming exclusively to Nintendo Switch.

Hyrule Warriors: Definitive Edition combines all the content from both Hyrule Warriors and Hyrule Warriors Legends along with including all of the DLC released. This is all neatly tied up in a glorious HD package to be played anywhere, anytime. You will also get bonus costumes for Link and Zelda representing their Breath of the Wild looks.

Just to pad out this news a little more, a new trailer was released for the Japanese version of the game, you can check it out below!

Will you be picking this game up in May? Let us know in the comments! 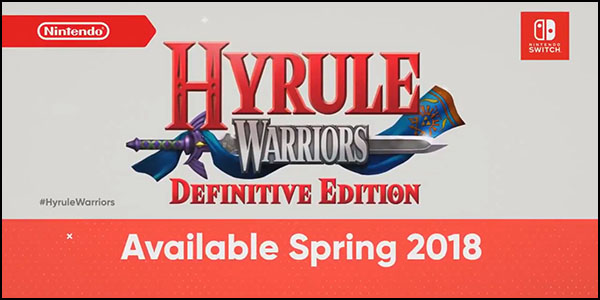 In a surprise announcement from Nintedo in today’s Nintendo Mini Direct, we have been given the pleasure of knowing Hyrule Warriors: Definitive Edition will be making it’s way to the Nintendo Switch this Spring! It will include all of the content from Hyrule Warriors, Hyrule Warriors Legends and all DLC sets from both games in one package!

Along with this being truly the most definitive version of Hyrule Warriors, which now you can play the Legends additions in glorious HD, we will also be seeing a new outfit for Link and Zelda. Their Legend of Zelda Breath of the Wild looks!

We have no more information aside that, and a nice looking trailer (embedded below), so if we will be seeing a new Season Pass for this game for even more content, or the actual release date – we will find out in due time. Until then, get done with Fire Emblem Warriors because Link is soon to be back in town!

What to expect with this hefty pack of DLC? Well there are two new characters with their own badges, weapons and movesets to enjoy! Along with this there are three new unique costumes based on Majora’s Mask game as well as an entirely new Adventure Map. It is likely to have it’s own 8bit revamp of a much loved Majora’s Mask song like Twilight Princess received too. You can also expect to see a new “Majora’s Mask” costume for all characters to be unlocked within the Adventure Mode map as well!

It shouldn’t be too much longer to wait or this beefy pack to release, and we here at KOEI Warriors: Conquerors absolutely can’t wait to get our hands on it. And for those of you who have yet to buy Hyrule Warriors or the DLC bundle, now will be the time to invest as the game is as packed and content filled as ever! Both Nintendo and KOEI Tecmo have done an amazing job!

The Master Quest Pack and Twilight Princess Pack are already released and ready to purchase, and February will offer it’s final pack of the 4 set bundle; The Boss Pack. We will discuss this more next month however!

Are you excited for the Majora’s Mask Pack? Will you be getting the DLC and/or picking up the game? Let us know in the comments!