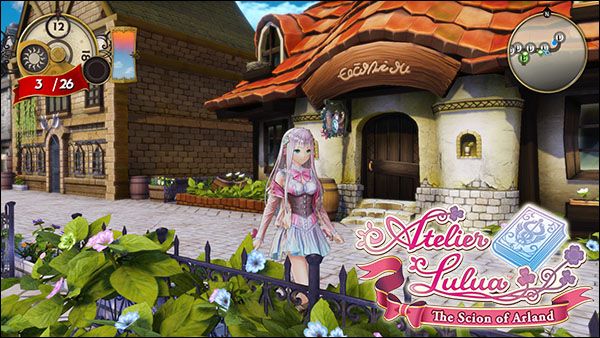 With the upcoming release of Nelke & the Legendary Alchemists, in case you forgot another Atelier title is arriving in a few months time. Atelier Lulua ~The Scion of Arland~, and KOEI Tecmo have now gone into further detail towards their extensive Synthesis system.

Set a fair while after the last title in the Arland series, you play as Lulua Frixell, the daughter of Rorona (the titular character of the first Arland title). On your adventure you’ll be discovering both new and old landscapes, and see how time has changed the world of Arland, for best or worse. Within the numerous environments you’ll get to explore, you’ll find many Materials you can pick up and use for your future Synthesising.

You can read the full explanation below:

Following the adventures of the young Lulua Frixell, players set out to uncover the mysteries of an ancient codex and the land of Arland itself! Along Lulua’s journey she’ll discover beautiful lands– some new and un-explored –whilst others have been affected by the tides of time since Rorona, Totori, and Meruru once travelled across Arland. Throughout these diverse environments, players will find a bounty of raw materials, and as they fully explore each area they will not only unlock new places to explore, but they’ll have a higher chance of finding rarer resources to help Lulua in her quest to learn the ultimate truth about the mysterious kingdom of Arland.

These rare materials are used as part of the game’s Synthesis system, a fundamental part of the Atelier series which allows alchemists to create new items. In Atelier Lulua: The Scion of Arland players will decrypt the codex to unlock a variety of new and exciting recipes which will in turn, help them throughout their adventure. The Synthesis system in this latest entry combines the Arland trilogy’s ‘quality’ and ‘trait’ systems, allowing for items to take on entirely new characteristics, along with the Mysterious trilogy’s ‘elements’ and ‘boost item’, giving items powerful abilities that wouldn’t be previously possible. These fresh-yet-familiar systems synthesise together with the new ‘Awakened Effects’ mechanic to offer a bounty of possibilities to aspiring alchemists.

When at the cauldron, players can use a raw material with the ‘Awakened Effects’ ability in the mix to give the resulting item a secondary element –combine a Fire Damage Awakened Effect material with a Thunder Bomb –, and the resulting item will be a bomb which releases both thunder and fire for a devastating blow! As players learn all of the Synthesis system’s intricacies, they’ll be able to create a variety of unique and useful items to use throughout the lands of Arland and in battle.

Alongside this news, a new set of gameplay trailers have also been provided to showcase the Synthesis gameplay for you to observe yourself. You can view these below:

It wasn’t too long ago that KOEI Tecmo announced a nifty Limited Edition for Atelier Lulua, which you can pre-order now over at NIS Europe / NIS America Online Store.

Atelier Lulua ~The Scion of Arland~ will be releasing May 21st in the US and May 24th in EU for Playstation 4, Nintendo Switch and PC via Steam.

What are your thoughts on the Synthesis gameplay for Atelier Lulua? Are you excited to get your hands on the game this May? Let us know in those comments!

>> Check out our Atelier Lulua ~The Scion of Arland~ game page now!
>> Join the discussion on our forum now!