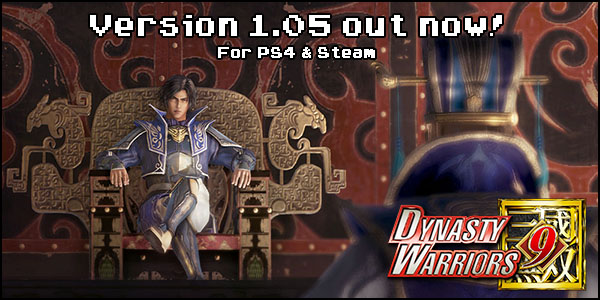 As more and more time passes from the release of Dynasty Warriors 9, more patches and updates come out to fix and improve the experience of the title. Today Version 1.05 released for the game on PS4 and Steam. You can check out below what came with this patch.

Also we want to add that the XBOX One version, albeit a little bit behind is also getting these patches come through, with it receiving the last patch earlier in the month. So don’t fret if you are an XBOX One buyer of the game!

That’s a new set of fixes and additions to the game added right there. But what do you think of this? Are you glad KOEI Tecmo are showing continued support post-launch for this game? Let us know in the comments!

One comment on “Dynasty Warriors 9 Version 1.05 Patch now out!”