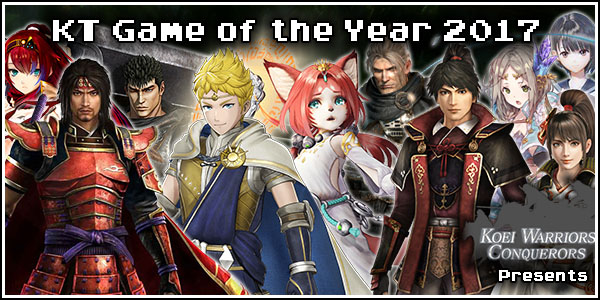 It’s the start of a new year, and a fresh return from us here at KOEI Warriors and KOEI Warriors: Conquerors! But what better way than to kick off 2018 other than presenting our esteemed (and VERY desirable) Game of the Year 2017 award and Runner Up award for KOEI Tecmo’s releases! So without further ado, our awards!

To start off with, KOEI Tecmo has released a slew of games in 2017, from a variety of “Warriors” spin-offs, new IPs and more Gust JRPGs for our playing pleasure, but there are a certain few that stood out of the pack! Though quite a few have been quality titles (with a few duds), the game we are awarding GOTY really stood it’s ground and showed us (in our opinion) an amazing gaming experience.

Though before we get to that, let us start off with our runner up! There were a few that could of easily taken this slot, however this title in particular we thought was a good bold step in the right direction from KOEI Tecmo on what hopefully we will see more of in the future.

Samurai Warriors: Spirit of Sanada get’s our Runner-up award for delivering a meaningful story filled with emotion and depth we rarely see in the main Warriors entries. Focusing heavily on the rise and fall of the Sanada clan, introducing new character Sanada Masayuki (Father of Sanada Yukimura / Sanada Nobuyuki) and a bunch of other unique characters it really was a wild ride! From when we started as a simple subsidiary of the Takeda clan to the infamous conclusion of the Sanada brothers, we were hooked from start to finish.

We very much hope KOEI Tecmo will continue in this style focusing on other stories within Samurai Warriors, Dynasty Warriors or even other Historical periods yet to be covered. It is definitely a much more impacting way to get these amazing stories across.

Honourable mentions go to Fire Emblem Warriors for being a standout entry in the Warriors’ spin-offs, along with Nintendo’s input much like Hyrule Warriors (which we gave our GOTY 2014 to). However with too many characters sharing the same move sets, characters already in the game locked behind a DLC paywall and the variety of content just not being up to the standard we had hoped, this just misses out. Though a console Warriors game on the go is a sure fire way for a great time!
-Also no online, boo you Nintendo and KOEI Tecmo.

Now onto the meat of the awards, our riveting KT GOTY 2017 award! It may of been quite predictable to some, but here is the game we give our award to!

Ni-Oh! A surprisingly entertaining action heavy new IP from KOEI Tecmo and Team Ninja. When the gaming industry has been stuck in a rut with constant sequels and remasters, we see this masterpiece of an action hack ‘n slash title hit the Playstation 4 in early February. Boasting similar qualities and difficulties now known to be called “Souls-like”, Ni-Oh mixes fast paced action (ala Ninja Gaiden) with increasingly more difficult challenges and enemies to face off against.

A story focused heavily on the Sengoku Jidai war between Tokugawa Ieyasu and Ishida Mitsunari, you play an Irish Warrior named William from England in search for a precious metal known as Amrita. Taking your travels to Japan to hunt down the mysterious Edward Kelley, you get yourself involved in the Warring States with a splice of mystical paranormal tales mixed into the story and adventure.

We absolutely adored this game, praising it’s gameplay to high regards with how swift and satisfying the action feels. Though the game might be difficult for some, persevering through it to get better is very much worthwhile as this is a gem of a title buried in a slush of mediocre releases. Filled to the brim with content, a long story, side-missions and a large chunk of DLC all released (and included in the Complete Edition – out now on PS4 and Steam), you can spend hours upon hours playing this game and still have more to do! This admin has already clocked over 500 hours alone on it!

Fans of Ninja Gaiden, Dark Souls type games or any action heavy hack n slash games we recommend this highly for. Get after the initial difficulty spike and you won’t regret it!

And that is it for 2017! We know there were a bunch of other great games released by KT that year also, but this is of course our opinion! So be sure to share with us your thoughts, if you agree, don’t, or have other KT games you’d rank as your GOTY 2017, stick ’em in the comments!

Have a great 2018 KOEI Tecmo! And all you Conqueror’s out there!

One comment on “KWC Presents: KOEI Tecmo Game of the Year 2017!”