Have you ever wanted to hack and slice up hundreds of generic soldiers with the tap of a few buttons while you were waiting for the train? Tecmo-KOEI have answered your prayers with their first instalment of the Legendary repetitive hack n slash series Dynasty Warriors on the Playstation Vita. With it’s usual offering of many characters to decimate hundreds upon thousands of peons as stylish and easy as possible. Now to some, that could sound like a massive turn off. Sure it does come off as very repetitive and very much button mashing from start to finish, and yes that’d be true. But that is by far not a bad thing.

Slash your enemies with devastating attacks.

For those of you who are unaware of the Dynasty Warriors series, it is your hack n slash fighting game set in Ancient China during the Three Kingdoms period. You select from dozens of playable characters to destroy everything you see on the battlefield by a multitude of Square and Triangle button combinations. The story itself is portrayed with still images, chat windows that are all voiced and narration of the progression of history. The game tries hard to stay true to the Three Kingdoms novel, but being a game it has many fictional plot holes also to spice up the fun factor. That is pretty much the series in a nutshell.

Dynasty Warriors NEXT tries to stir the pot by adding more strategic elements to the gameplay. To begin with in the Campaign, you will get the main story of the game where you’ll branch through episodes depicting various historical events and their characters involvement. You will then be thrown into a strategy screen, where you see a map of China, different coloured areas showing you which force owns what areas. You get to choose stratagems which are pretty much cards that allow special abilities to occur within battles such as attack increase, speed increase, etc. There are also non battle cards that may increase your gold count which will allow you to pay for more stratagems. Once you have done this, you will then have a choice of territories to invade, most cases you won’t have much freedom which ones as it is very linear to the story. You choose where to invade then you go to battle, which allows you on the pre-menu to choose a version of your weapon – which they all have different stats – equip items, and such. You can also find information related to the battle on this menu also, but most of it is needless as the objective is always the same.

Tap your way to victory!

Now you finally get to enter battle, where you can unleash your characters skill and might upon the unfortunate peons that swarm the landscape. Your goal most of the time is to either capture the enemy main camp, or take out the leader of the opposition. You can do this by just storming straight to the enemy main camp, or you can work your way there by taking various bases scattered around the battlefield which will strengthen your forces as well as weaken the enemies. You’ll find bases such as Supply Camps which decrease the amount of peons you have to kill to capture other bases, or dispatch bases that allow you to bring in reinforcements.

Within battles you will also come across features specifically made for the Playstation Vita and it’s special controls such as the touch screen and rear touch pad. These are known as sudden encounters, which could be from a dual with an enemy officer, where you have to swipe the screen in specific ways to defeat your foe, or tapping madly on your screen to defeating a few charging enemies. These are fun to start off with but they get dull and very repetitive quickly, and it is also unfortunate that you can’t turn off these encounters all together. Then pretty much rinse and repeat. If none of this sounds appealing to you then you really shouldn’t bother with Dynasty Warriors series at all 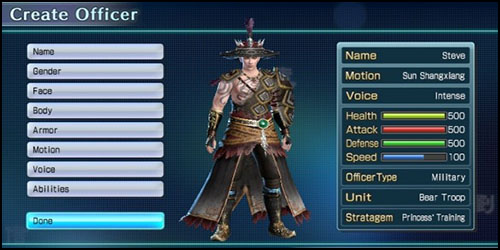 Create whoever you want with the in-depth edit mode.

For those that are, you’ll find this a good way to just pick up and play with yourself, or others over ad-hoc in small bouts for some mindless action. The graphics are slick and clean, the frame-rate stays strong throughout too, even when there are 100’s of soldiers on the screen at once. The soundtrack is mainly cheesy guitar which will get boring rather fast. It is strangely satisfying when you’re bored, tired or stressed to just mindless chop through tons of enemies. There is an almost limitless replay value as you can play Conquest Mode, which offers very much the same game as Campaign mode, but you have complete freedom of who to invade, build up territory levels to take down your enemy and overall just have random fun each time you play.

All in all, the game is very repetitive, but it’s that repetitiveness and mindlessness that is great to relieve stress after a hard days work or hard day at school. Can be played in both long and short sessions too. It may not be for everyone as it can get dull fast as it is very basic in the form of gameplay, and just mashing the same few buttons can get tiresome quick, but if you can get past that there is a very solid game with tons and tons of game to enjoy.