A new collaborative Warriors game Touken Ranbu Musou has been announced for Nintendo Switch in Japan! 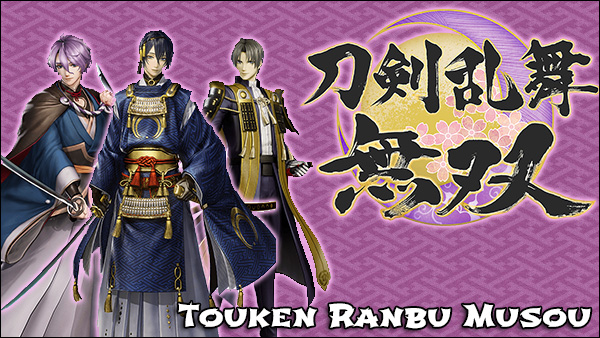 It has been quite some time since we had a fresh announcement of a new collaborative Warriors title, and in a surprise twist, Omega Force and Ruby Party (known for Otome games such as Harukanaru Toki no Naka de series and Geten No Hana) will be at the helm of development.

In partnership with DMM Games, the new Musou title is based on the hit Online sword training game Touken Ranbu ONLINE. Simply titled Touken Ranbu Musou, the game will feature 15 playable characters across 5 units from the Warring States period. So far three characters have been revealed, Mikazuki Munechika, Kasen Kanesada and Heshikiri Hasebe. You can read a brief description below all about what Touken Ranbu is:

A “swordsman” whose famous sword has transformed into a warrior. As a player, you will become the “God of God” who will lead them, and will enter into a battle to protect history. Collect and raise a total of eight unique sword men, including daggers, wakizashi, uchigatana, swords, Ōdachi, naginata, spears, and swords, to form your own unit! It is a sword training simulation game that captures various battlefields.

Currently no gameplay has been revealed, and no news of a Western release (or Japanese for that matter). More details are set to arrive soon.

Touken Ranbu Musou will be launching on Nintendo Switch and on PC via DMM Games Player.

>> Check out the Touken Ranbu Musou teaser site now!
>> Join the discussion on our forum now!