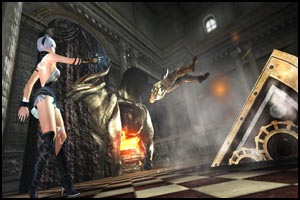 Deception IV: Blood Ties is the newest installment of the Deception series, or previously known as ‘Trapt’.

In this game you’re the Daughter of Satan. Or rather a splitted part of his soul. Your mission is to get all pieces of the 12 verses to release Satan from his prison, together with your 3 Servants.

Nobody is pleased with your mission and is trying to stop you. The battles are like this: Set traps in the room, in order to kill or capture your opponent.  The more traps you use in a row the more points you get. So you have to make sure to connect as many traps as possible.

For connecting your traps the ‘editor’ can help you. It shows the room in squares and you can place the traps in those squares. Traps that shoot the enemy away, will be shown with an arrow, so that you can place the next trap for continuing your combo.

While being in a trap combo, the enemy loses health. On the stages you see a big cage. When the health of the enemy is red you can try and shoot him into that cage in order to get some bonus points.

There are also a lot of things you need to be careful concerning your enemies. Some enemies are rather powerful and are protected by armor. You can’t break the armor just like that and when you attack them regardless it won’t show any effect. So you strategically need to think of how to break their armor first before actually try to kill them. An example is shown in the first Chapter, so that you get to know on how to break armors or to attack enemies which are resistant to certain traps. To know what the enemy’s resistance or  to what he is invulnerable, simply go to the pause-menu and check your enemy’s stats with the ‘Devil’s Eye’. You’re also able to do that in your enemy’s introduction, which comes everytime a new enemy enters the room.

The game is very newcomer friendly as it has a tutorial, which covers all main aspects you need to know in the game and the 3 Servants also give you advices in the first Chapter. Like where to go, what to set, where to set and how to link stuff up or what you can do with some mechanism.

And for orientation you have a nice map in your pause-menu.

The story itself is being told with a small little monologe of the main character at the chapters begin and then build like a common know Visual Novel, in conversations between the various characters.

All in all, the game is rather fun for now and then but in my opinion it’s no game you can play through in one go without a break. The story seems interesting as it is a Anti-hero based story which isn’t too common but it also is rather boring in the beginning as all you see in the story is about the 12 holy verses. The characters designs aren’t really to my taste, they wear very revealing clothes and also are very arrogant. The game is worth trying if you like strategically build games and Anti-hero stories but I wouldn’t recommend it if you can’t stand revealing, arrogant female characters and a story which build up very slowly.